Today, Soman Chainani, author of the School for Good and Evil series, spoke to HCMS 6th graders.  We all had a blast and are pumped to start reading the series (if we haven't already).

Soman began by telling us what inspired him to write the series.  When he attended Harvard, he was placed into a Seminar - Fairy Tales and Literary Culture of Childhood - which turned his understanding of fairy tales on their head.  You see, he grew up watching all of the Disney movies.  In fact, he thought Disney created these tales.  But thanks to this seminar, he soon realized that he had it wrong - Disney actually butchered these classic tales by Grimm & Anderson.  Disney sends unrealistic messages to children, undoing their original intent, to prepare children for adulthood and teach them lessons.  Yes, the classic versions may be a bit dark and bleak, but they were honest.  Soman talked about the difference between the Disney and original version of The Little Mermaid, claiming in the Disney version, girls are taught that it's ok to fall for a guy just based on his looks, even if you've never spoken to him before.  Whereas, the original version, said that you shouldn't run away and fall for a stranger, or you will die.

So Soman set out to write a trilogy in the form of the classic tales.  And so The School for Good and Evil was born.  And the cool thing about it is that you're never quite sure who is good and who is evil.

Soman dazzled us with fun videos, descriptions of his books, opened our eyes to the initial intent of fairy tales, and played a fun poll with us.  It was a fantastical visit!

So hold onto your hats and because this read will take you on a fantastical ride!

We have signed copies of the books in the library for sale through next Friday, November 6.  Come and get them!

Here are some pictures from the visit today: 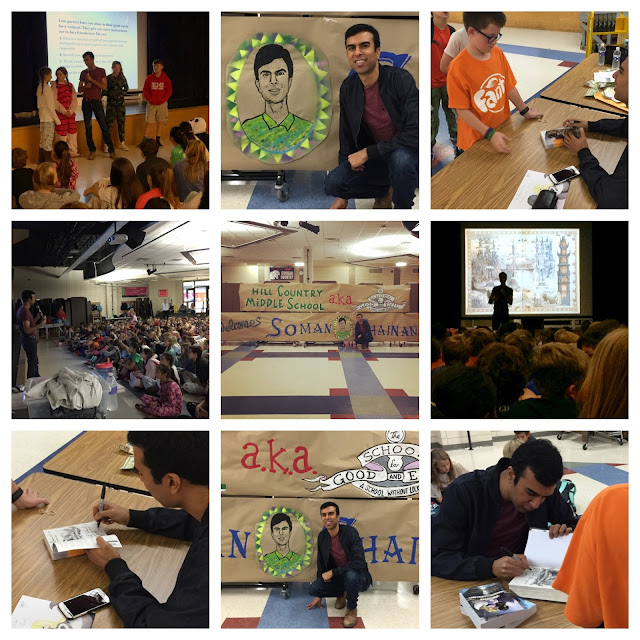 Special shout out to Mr. Reilly for the amazing posters!
Posted by Heather Schubert at 2:29 PM

CHECK OUT THESE NEW BOOKS